The Group under its new policy of diversification had made strategic investments in Edible Oil and Ghee Industry in Pakistan through direct foreign investment from Singapore. The major raw material for this industry is Raw Oil which is extracted from various botanical species. It enriches the diet of some three billion people in more than 150 countries around the world. The balanced proportions of saturated and unsaturated fatty acids found in these raw  oil make it unique among edible oils. It also contains exceptionally high levels of antioxidants as well as anti-cancer and cholesterol-lowering minor constituents (tocotrienols, tocopherols, and carotenoids).

The cooking oil and vegetable ghee industry is another large manufacturing sector in Pakistan. This industry was nationalized in 1972 however since 1988 private sector has been allowed to run this industry. A total of around 160 small and medium sized vegetable and ghee plants are operational in Pakistan. From a production of 4000 tons a day in the 1950s, it has grown to about 70,500 tons/day in 2007. Pakistan imports 70 – 80 % of its raw oil, mostly from Malaysia. Besides raw oil water, electricity and natural gas are the  major utilities consumed in the manufacturing of Oil and Ghee. The main process for Cooking Oil is include Degumming, Neutralization, Bleaching and Deodorization. For ghee manufacturing, hydrogenation is also being carried out in addition to above process.

PAK VEGETABLE GHEE and PAK COOKING Oil are the two main registered brands the company had launched in Feb, 2008 with a vision to achieve a sales and production target of minimum 50,000 tons in the year 2008.

Petrosin Edible Oil Division has been established to monitor, manage and control the group’s interest in this newly invested sector and a team of professional from the industry have been hired to ensure that PAK COOKING OIL and PAK VEGETABLE GHEE is being recognized as the best selling Oil and Ghee in Pakistan.

PETROSIN Group produces both Vegetable Ghee and 100% Pure Canola Cooking Oil to give our customers a choice of products to choose from and marketed in Pakistan under the brand name PAK . 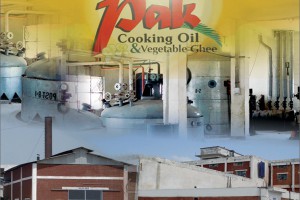